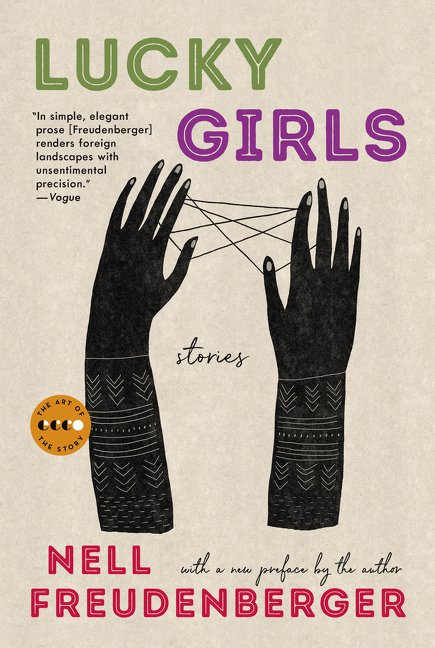 Lucky Girls encompasses five stories, set in Southeast Asia and on the Indian subcontinent–each one bearing the weight and substance of a short novella–narrated by young women who find themselves face-to-face with the compelling circumstances of adult love. Living in unfamiliar places, according to new and often-frightening rules, these characters become vulnerable in unexpected ways and learn, as a result, to articulate the romantic attraction to landscapes and cultures that are strange to them.

In “Lucky Girls,” an American woman who has been involved in a five year affair with a married Indian man feels bound, following his untimely death, to her memories of him and to her adopted country. And in “Letter from the Last Bastion,” a teenage girl begins a correspondence with a middle-aged male novelist, who, having built his reputation writing about his experiences as a soldier in Vietnam, confides in her the secret truth of those experiences, and the lie that has defined his life as a man.

Now in a new edition with a preface by the author, Lucky Girls marked the arrival of a writer of exceptional talents, one whose generosity of spirit, clarity of intellect and emotion, and skill in storytelling set her among our most gifted and exciting voices.

I had often imagined meeting Mrs. Chawla, Arun’s mother. It would be in a restaurant, and I would be wearing a sophisticated blue suit that my mother had sent me soon after I moved to India, and Mrs. Chawla would not be able to keep herself from admiring it. Of course, in those fantasies Arun was always with me.

As it happened, Mrs. Chawla appeared early one morning, in a car with a driver, unannounced. I was sitting at the kitchen table in my painting shorts, having a cup of tea. There was no time to straighten up the living room or take a shower. I went into the bedroom, where Arun and I had often slept, and put on a dress— wrinkled, but at least it was clean. I put my cup in the sink and set a pot of water on the stove. Then I watched through the window. Mrs. Chawla had got out of the car and was standing with her arms crossed, instructing her driver how to park. The car moved forward, backed up, and then inched forward again.

Mrs. Chawla shaded her eyes to look at the backyard: the laundry line with my clothes hanging on it, the grackles perched on the telephone pole, the pile of soft, rotting bricks. I had a feeling that had come to seem familiar in the eight months since Arun had died, a kind of panic that made me want to stand very still.

“Hello, Mrs. Chawla,” I said. “I’m glad you came.” From her handwriting, I had expected someone more imposing. She was several inches shorter than I was, and heavy. Her hair was long and dyed black, with a dramatic white streak in the front; and she was wearing a navy blue salwar-kameez, the trousers of which were tapered at the ankles, in a style that was just becoming fashionable.

“Yes,” she said. “I’ve been meaning to. I can’t stay long.” She gave me a funny smile, as if I weren’t what she had expected, either.

“Will you have some tea?” I offered.

“Do you have tea?” she asked, sounding surprised. She looked at the drawn blinds in the living room. There was a crumpled napkin next to the salt and pepper shakers on the table, where I had eaten dinner the night before, and which I had asked Puja, the servant, to clean. Now that it was summer, cockroaches had started coming out of the walls.

“Please don’t go to any trouble,” she said. “Puja can do it—is she in the kitchen?” Arun had hired Puja to do my cooking and clean- ing; when he told me she had worked for his mother, I’d hoped that Mrs. Chawla was making a friendly gesture. In fact, Puja was a terrible housekeeper and a severely limited cook. She lived in a room at the back of the house, with her husband and four little girls; at night I often saw her crouched in the backyard, making chapatis on a pump stove with a low blue flame.

Mrs. Chawla walked confidently toward the kitchen, calling Puja in a proprietary voice, and I realized that Arun’s mother had been in my house before. She could have come any number of times, in the afternoons, when I taught art at the primary school or went out shopping in Khan Market. Puja would have let her in without hesitation.

When Mrs. Chawla reappeared, she scrutinized the chairs, before choosing to sit on the sofa. She smiled, revealing a narrow space between her teeth. “Where exactly are you from?” she asked.

“My father lives in Boston, but my mother is in California now,” I told her.

“Ah,” said Mrs. Chawla softly, as if that explained everything. “An American family. That must make it difficult to decide where to return to.”

I had no plans to return, as I should have explained. “It rules out Boston and California,” I said instead.

My brother, I added, was getting married in Boston in July. “And you like the bride?” she asked.

“Oh,” I said. “I only met her once.” I could feel the next question coming, and then a thing happened that often happens to me with people who make me nervous.

Her name, which I knew perfectly well, slipped into some temporarily unrecoverable place. “Actually, I don’t remember,” I said.

Mrs. Chawla looked at me, puzzled. “How strange,” she said.

Puja brought the tea. She knelt on the floor and began placing things, item by item, on the coffee table: spoons, cups, saucers, milk, sugar, and a small plate of Indian sweets that Mrs. Chawla must have brought with her. The tea, it seemed, was no longer my hospitable gesture.

“How is she doing?” Mrs. Chawla asked, nodding at Puja.

“She’s wonderful,” I lied. Now that Arun wasn’t here to tell her what to do, the house was getting dirtier and dirtier.

Puja’s little girls were watching us from the kitchen doorway.

When Mrs. Chawla saw them, she said suddenly, “Girls,” and repeated it sharply in Hindi. “I have told her that if she has another baby”—Mrs. Chawla paused and looked at Puja—“Bas! Enough, I’m sending her back to Orissa.” She turned back to me. “That’s east India,” she informed me, as if I had never seen a map of the subcontinent. “The people there are tribals. Did you know that? Puja is a tribal. These people have nothing, you know, except floods and cyclones. Now they’re having terrible floods—have you seen them on television? Thousands of people are sick, and there isn’t enough drinking water. I tell her that, and what do you think she says?”

Puja knew only a few words of English. She seemed to be smiling at her feet, which were bare, extremely small, and decorated with silver toe rings.

“She says she needs another child because she wants to have a boy,” Mrs. Chawla said. “Stupid girl.” Puja giggled. “Stupid,” evidently, was one of the English words she did know. Then Mrs. Chawla said something else, in Hindi, and Puja stopped giggling and left the room.

“Did you understand?” Mrs. Chawla asked me.

“Very good,” said Mrs. Chawla. “I said she was the kind of unfortunate woman who has only girls.”

Mrs. Chawla eyed me craftily. “You think I’m cruel to them.” “No,” I said. I was used to this kind of frankness from Indian women of Mrs. Chawla’s age and station, and I liked it.

Mrs. Chawla looked as though she were going to say something else, but just then the electricity went out.

“I’m sorry,” I said. “It usually comes on again in a second.” “This is a good area, a government area,” she said approvingly.

“Did you know that?”

I had been living on Pandara Road for almost five years, a fact that Mrs. Chawla knew, so I didn’t say anything. The lights came on about halfway, low and flickering, and the fans spun just enough to move the air. Often this happened at night, when I was sitting in the living room, pretending to read.

Mrs. Chawla put her hand on my arm. “The point is—what’s wrong with girls?”

“Then . . . good,” Mrs. Chawla said. “You can help me teach her.” She leaned back, and the cheap wicker sofa creaked. I had bought it because Arun thought wicker was cool. I didn’t know why a sofa needed to be cool, and now cockroaches were living in the little wicker spaces. I said a short, fervent prayer that Mrs. Chawla wouldn’t see a cockroach. Puja started to pour the milk in my tea, but Mrs. Chawla stopped her. “Let the lady do it herself,” she said, in English, and then turned to me. “She’s never seen a woman like you, living so well on her own.”